How to Overcome the Challenges of Adopting WDM-PON in FTTx?

The bandwidth demand in the access network has been increasing rapidly over the past several years. Passive optical networks (PONs), as the most economical FTTx architecture that needs no power supply, have evolved to provide much higher bandwidth in the access network. A PON is a point-to-multipoint optical network, where an optical line terminal (OLT) at the central office (CO) is connected to many optical network units (ONUs) at remote nodes through one or multiple 1:N optical splitters. WDM-PON combines the virtues of point-to-point dedicated connections with the fiber efficiency and economics of PON, which is considered as a candidate solution for FTTx network. This article offers solutions for deploying WDM-PON in regard to its cost and technical challenges

WDM-PON is the passive optical network (PON) based on wavelength division multiplexing (WDM) technology, which delivers higher network security. This system allows ONUs to have light sources at different tuned wavelengths coexisting in the same fiber, increasing the total network bandwidth and the number of users served in the optical access network. The CO contains multiple transceivers at different wavelengths with each output wavelength creating a dedicated path or channel for a particular user by passing through a wavelength selective/dependent element at the remote node (RN). Wavelength selection can also be achieved by filtering at the user. The upstream connection similarly utilizes a dedicated wavelength channel. 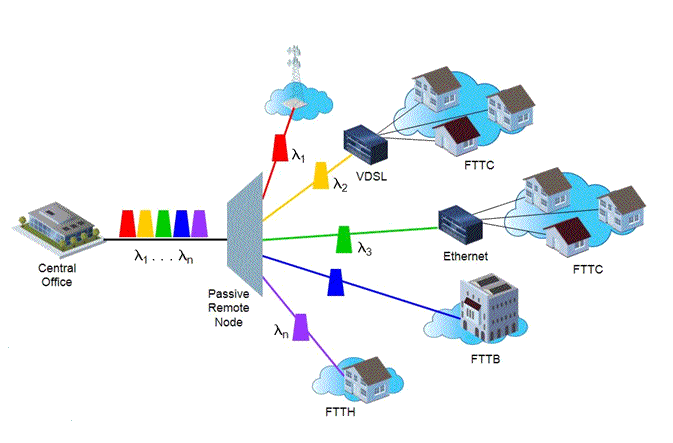 Why Apply WDM-PON in FTTx Networks?

We have known that WDM-PON supplies each subscriber with a wavelength instead of sharing wavelength among 32 or even more subscribers in TDM PON, thus providing higher bandwidth provisioning. WDM-PON is regarded as a candidate solution for next-generation PON systems in competition with TDM PON for possessing the following advantages:

WDM-PON Challenges: How to Deal with Them?

Despite these attractive features, there are also some demerits that hinder the implementation of WDM-PON networks.

Concerning the challenges that remain in WDM-PON deployment, here we provide some solutions for your reference.

The ONUs in WDM-PON need to be colorless, which means no ONU is wavelength specific in order to reduce the costs of operation, administration, maintenance and production. Local emission is proposed to solve this problem. There basically exist two local emission approaches: wavelength tuning and spectrum slicing. The ONU of the wavelength tuning approach consists of a tunable laser diode (TLD) as a transmitter (Tx), an optical receiver (Rx) with wavelength selector (WS), and a WDM coupler that divides or combines the upstream and downstream signals. The configuration of the ONU in the spectrum slicing approach is similar to that of wavelength tuning approach, except that a broadband light source (BLS) with WS is used instead of the TLD. 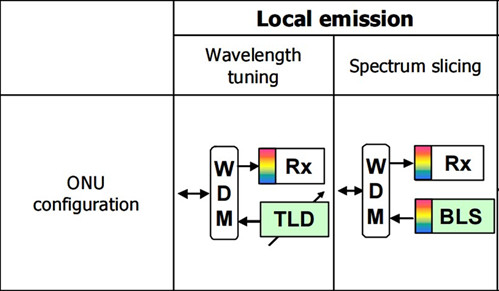 As for long-reach network, protecting the feeder fiber that transmits data from potential damage is vital. Then how to achieve the protection? It is suggested to adopt 3-dB optical couplers, which can be used to split or combine the path of WDM signals to or from both the working and protection fibers in the OLT or in the wavelength router. Note that the OLT and the wavelength router are typically located in the central office (CO) and in the access node (AN) respectively. However, this protection method has a low loss budget because of the adoption of the 3-dB optical couplers. To this end, a wavelength-shifted protection scheme has been proposed, which is deploying the cyclic property of the 2×N athermal arrayed-waveguide grating (AWG) and two wavelength allocations for working and protection. In this case, 3-dB optical couplers are not needed.

WDM-PON is proving to be the most promising long-term, scalable solution for delivering high bandwidth to the end user. Meanwhile, advances in key device technologies had laid the foundation for realization of a high performance, low cost WDM based PON system. Thus, in competition with other high-speed access network technologies, WDM-PON is considered the most favorable for the required bandwidth in the near future.

This entry was posted in FTTH Network, How to, PON, WDM system and tagged FTTH, PON, WDM network, WDM PON. Bookmark the permalink.