An optical network that involves WDM (wavelength division multiplexing) currently gains in much popularity in existing telecom infrastructure. Which is expected to play a significant role in next-generation networks to support various services with a very different requirement. WDM technology, together with EDFA (Erbium Doped Fiber Amplifier), allowing the transmission of multiple channels over the same fiber, that makes it possible to transmit many terabits of data over distances from a few hundred kilometers to transoceanic distances, which satisfy the data capacity required for current and future communication networks. This article explains how can WDM system benefit from this technology.

The key feature of EDFA technology is the Erbium Doped Fiber (EDF), which is a conventional silica fiber doped with erbium. Basically, EDFA consists of a length of EDF, a pump laser, and a WDM combiner. The WDM combiner is for combining the signal and pump wavelength so that they can propagate simultaneously through the EDF. EDFAs can be designed that pump energy propagates in the same direction as the signal (forward pumping), the opposite direction to the signal (backward pumping), or both direction together. The pump energy may either by 980nm pump energy or 1480nm pump energy, or a combination of both. The most common configuration is the forward pumping configuration using 980nm pump energy. Because this configuration takes advantage of the 980nm semiconductor pump laser diodes, which feature effective cost, reliability and low power consumption. Thus providing the best overall design in regard to performance and cost trade-offs.

Why EDFA Is Essential to WDM Systems?

We know that when transmitting over a long distance, the signal is highly attenuated. Therefore it is essential to implement an optical signal amplification to restore the optical power budget. This is what EDFA commonly used for: it is designed to directly amplify an input optical signal, which hence eliminates the need to first transform it to an electronic signal. It simply can amplify all WDM channels together. Nowadays, EDFA rises as a preferable option for signal amplification method for WDM systems, owing to its low-noise and insensitive to signal polarization. Besides, EDFA deployment is relatively easier to realize compared with other signal amplification methods.

4-Channel WDM System With or Without EDFA: What Is the Difference?

Two basic configurations of WDM systems come in two forms: WDM system with or without EDFA. Let’s first see the configuration of a WDM system without using it. At the transmitter end, channels are combined in an optical combiner. And these combined multiple channels are transmitted over a single fiber. Then splitters are used to split the signal into two parts, one passes through the optical spectrum analyzer for signal’s analysis. And other passes through the photodetector to convert the optical signal into electrical. Then filter and electrical scope are used to observe the characteristics of a signal. In this configuration signals at a long distance get attenuated. While this problem can be overcome by using erbium-doped fiber amplifier. 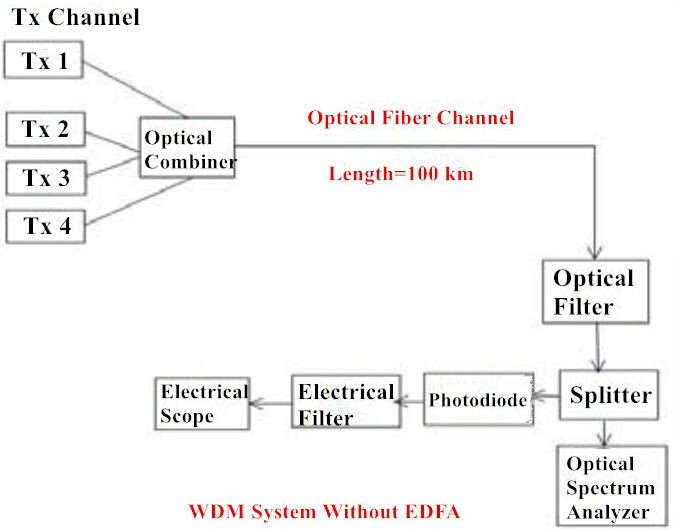 As for WDM system which uses EDFA, things are a little bit different. Although the configuration is almost the same as a WDM system without it, some additional components are used. These components are EDFAs which are used as a booster and pre-amplifier, and another additional component is an optical filter. With the adoption of an optical amplifier, this system doesn’t suffer from losses and attenuation. Hence, it is possible to build broadband WDM EDFAs which offer flat gain over a large dynamic gain range, low noise, high saturation output power and stable operation with excellent transient suppression. The combination provides reliable performance and relatively low cost, which makes EDFAs preferable in most applications of modern optical networks. 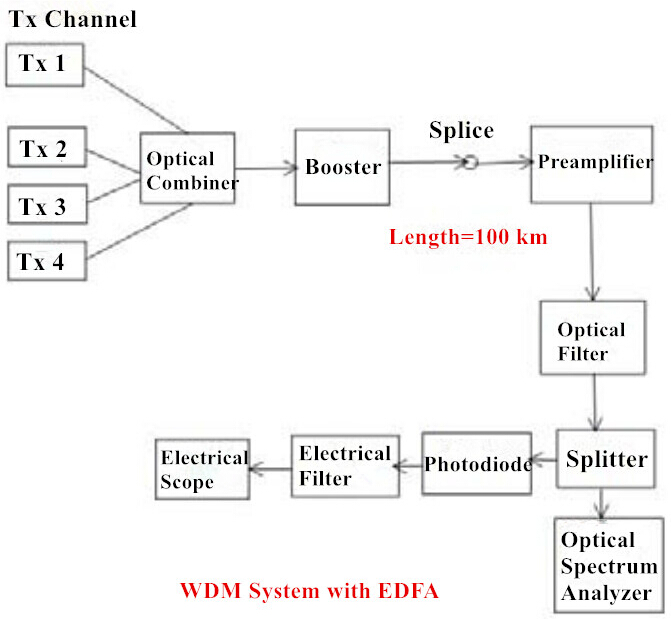 Among the various technologies available for optical amplifiers, EDFA technology proves to be the most advanced one that holds the dominant position in the market. In the future, the WDM system integrated with high-performance EDFA, as well as the demand for more bandwidth at lower costs have made optical networking an attractive solution for advanced networks.