What do you care most about a data center switch? The number of ports? The switch class? Or the operating system? Here is a comparison of two 48-port 10gbe switches from FS.COM and Cisco. Let’s see what the vendors value for their own devices.

FS N5850-48S6Q network switch is initially positioned as the bare metal switch, but you can choose the one pre-installed with Broadcom ICOS or Cumulus Linux. The combination of Cumulus Linux makes the N5850-48S6Q 10gbe switch stand head and shoulders above its counterparts. Here we revolve around the one with Cumulus Linux.
FS N5850-48S6Q network switch comes with 48 SFP+ 10Gb ports and 6 QSFP+ 40Gb ports, and each 40Gb port can operate in native 40-Gbps or 4 x 10-Gbps mode. N5850-48S6Q is a top-of-rack (TOR) or leaf 10Gbe switch in a compact 1U form factor, ideally suited for high performance and programmable data center environments. It performs excellent low latency and power efficiency in a PHY less design while providing high-reliability features such as redundant and hot-swappable power supplies and fans in forward and reverse airflow configurations. The switch supports advanced features such as MLAG, VxLAN, SFLOW, SNMP, MPLS etc, making it ideal for traditional or fully virtualized data centers. 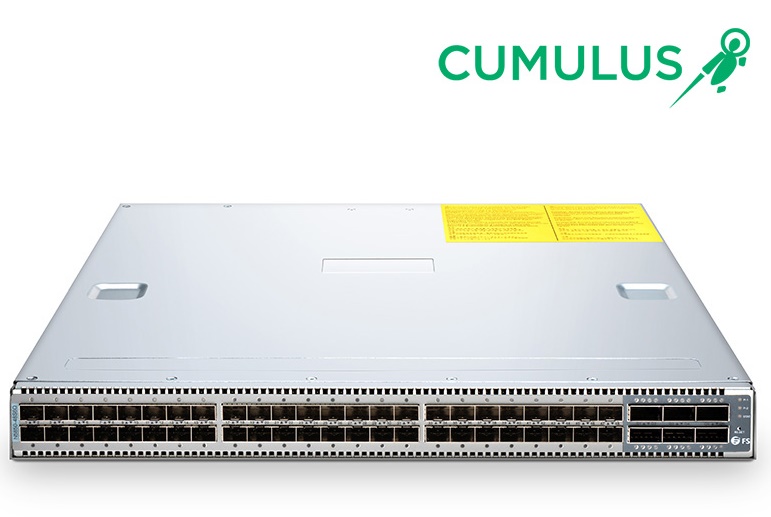 The Cisco Nexus 3172PQ switch is a dense, high-performance 10gbe and 40 Gigabit Ethernet switch. Externally, it shares the same port configuration and 1RU form factor with FS N5850-48S6Q 48-port switch. Internally, it runs the industry-leading Cisco NX—OS software operating system, providing customers with comprehensive features and functions that are widely deployed. It supports both forward and reverse (port side exhaust and port side intake) airflow schemes with AC and DC power inputs. Dual redundant power supplies make it possible for the switch to run with a single power supply and with one failed fan module. The switch also has a serial console port, a USB port, and an out-of-band 10/100/1000-Mbps Ethernet management port.

FS switches, generally, have the switching ports on the front panel. Oppositely, Cisco Nexus 3172PQ switch ports are at the rear side. As for the central processing unit (CPU), FS N5850-48S6Q boasts four cores and more cores will make your processor faster overall. The switching capacity is often a measure of the switch’s fabric bandwidth and the switch’s packets per second forwarding capacity and FS 1.44Tbps and Cisco 1.4 Tbps are about the same. The table shows a sharp difference in the cost, you can save more on the FS N5850-48S6Q and invest on cabling or other devices.

The operating system acts as an interface between the hardware and the programs requesting I/O. Cisco Nexus 3172PQ 48-port switch are shipped with Cisco NX—OS network OS. You will have an operating system based on Linux, however, you interact with a management layer that hides Linux and the guts of the system from you. It is hard to make some changes. Cumulus Linux on the other hand isn’t based on Linux, it is Linux. It was not long ago that Cisco proposed the segregation of hardware and software. The technology may not be full-fledged. Cumulus Linux is the only solution that allows you to affordably build and efficiently operate your network like the world’s largest data center operators, unlocking vertical network stacks.

At present, FS N5850 10gbe switch and Cisco 3172PQ are endowed with automation brought by Cumulus Linux and Cisco NX—OS respectively. Automation can replace the laborious manual workflows in configuration changes and upgrades, and also troubleshooting. One facet worthy of mentioning is that Cumulus Linux can seamlessly be applied to varied hardware, which outweighs Cisco NX—OS that is specialized.