CWDM and DWDM for Metro Networks: How to Make it Economical?

Fiber exhaust still appears to be a common problem faced by most metro (or metropolitan) networks. Although the cost of fiber optic cable is consistently dropping, the trenching, labor, and other installation costs towards optical fiber stay rather high. This may partially explain why an increasing number of metro networks incline to adopt WDM technology to enhance fiber capacity. It is known that WDM technology used in metro networks generally takes two forms: coarse WDM (CWDM) and dense WDM (DWDM). This article will deliver an overall comparison of CWDM and DWDM in metro networks, from the perspective of the roles each plays and the operating cost. Help you to decide how to reach an economical solution.

As for the major difference between the two WDM technology, their names imply it all: is the channel spacing within the window of the optical spectrum (see the picture below). CWDM has a wider pass-band that spaced at 20 nm apart, which allows for the use of less expensive components like uncooled lasers and thin-film filter technology. The cost advantage of CWDM makes it a more appropriate alternative for the shorter distance typically found in metro access networks.

However, metro networks sometimes demand for longer distance and more wavelengths that CWDM simply cannot satisfy, then DWDM with its narrow channel spacing (0.8 nm) should be put into use. The problem is that the components related to the latter are too expensive for some edge networks. In this case, the best solution is to combine both CWDM and DWDM in metro area networks.

CWDM nowadays commonly supports at least eight of the eighteen ITU-T G.694.2 defined channels over distances of up to 80 km. With simple point-to-point and ring network topology, CWDM eliminates the need for erbium doped-fiber amplifier (EDFA) typically associated with DWDM. CWDM’s lower cost and small footprint fit well with customer premises and co-location installations. And due to the readily available of Gigabit interface converters and small form factor pluggable (SFP) transceivers for CWDM platform, it gains in much popularity in enterprise and storage networks. CWDM is most fit in networks with the following features:

DWDM in the Metro Core

Carriers are consistently looking for a cheaper and simpler version of long-haul DWDM, which drives the equipment suppliers to adapt DWDM systems accordingly. Banded wavelength filters, elimination of dispersion compensation, and more tolerant channel spacing were seen as ways to accomplish this goal. Nowadays, DWDM is well suited to high-capacity core networks in the metro, and to regional extensions between metro areas.

The cost is still presented as a key difference in metro network systems. DWDM lasers are generally more expensive than those applied in CWDM system, the cooled DFB lasers offer cost-effective solutions for high-capacity large metro rings. And the cost of the this system is amortized over the large number of customers served by the systems. Whereas for metro access networks that demand for lower-cost and lower-capacity systems, it heavily depends on what the customer is willing to pay for broadband service. Since a metro access application would have fewer wavelengths, so based on equipment cost, CWDM is a more profitable solution for metro access points where cost is more important than capacity.

The Future of CWDM and DWDM in Metro Network

Some vendors offering both CWDM and DWDM technologies have merged the system building blocks onto a single platform. This approach allows the de-multiplexed CWDM traffic to be directly connected to DWDM transponders, saving equipment and space. It also enables end-to-end performance monitoring and cost optimization throughout the entire metro network. Then there is no need to choose between these two WDM technologies. The better choice is an integrated solution that makes use of the economies of CWDM for shorter distances, and provides the power of a DWDM network where longer distances and more capacity are needed. The result is an integrated, economical network that doesn’t require a carrier to compromise on quality, quantity, or cost. The DWDM building blocks are shown below. 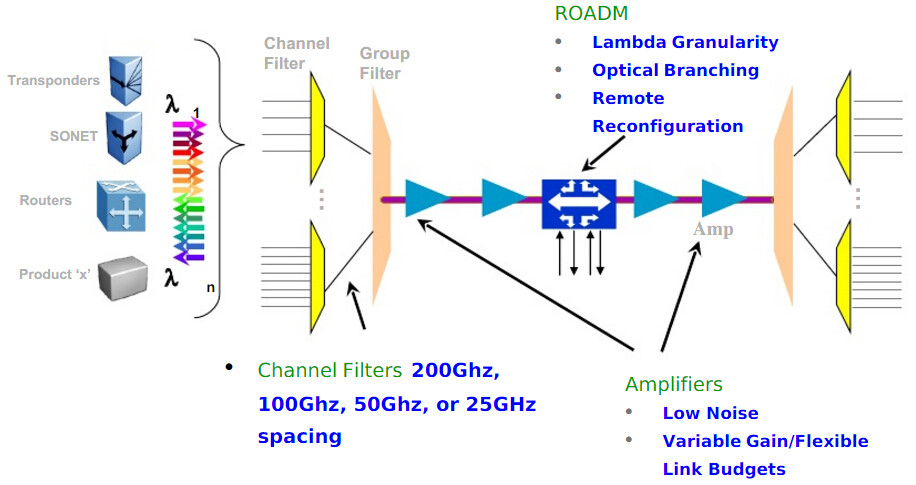 From what we have discussed in this article, we can conclude that metro networks will benefit from the mixture of CWDM and DWDM systems. And metro networks are becoming more flexible over this converged solution: with CWDM fitting the needs of today, and DWDM for the growing demand for increased coverage in the future. Take advantage of both the coarse and dense WDM technology, this integrated metro network that delivers much reliability and flexibility is the trend of the future.