Precisely, defining worst case is often a complicated task. If a receiver needs a minimum level of power to achieve the system BER target, then that level will dictate the minimum allowed output power of the transmitter. If the receiver can only tolerate a certain level of jitter, this will be used to define the maximum acceptable jitter from the transmitter. In general, there are four basic steps for optical transceiver testing, as shown in the following picture, which mainly includes the transmitter testing and receiver testing. 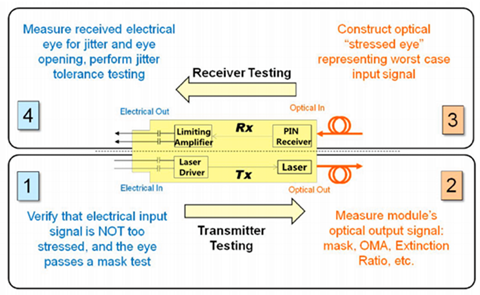 Transmitter parameters may include wavelength and shape of the output waveform while the receiver may specify tolerance to jitter and bandwidth. As an vital part in transceiver testing, testing a transmitter usually consists of two steps:

2. The optical output of the transmitter must be tested using several optical quality metrics such as a mask test, OMA (optical modulation amplitude), and Extinction Ratio.

Testing the receiver also serves as an essential part in transceiver testing. similarly, there are two steps:

1. Unlike testing the transmitter, in which case one must ensure that the input signal is of good quality, testing the receiver involves sending in a signal of poor enough quality. In this case, a stressed eye represents the worst case signal shall be created. This is an optical signal, and must be calibrated using jitter and optical power measurements.

2. The last step is to test the electrical output of the receiver. There are three basic categories we should follow:

Complicated as it is, fiber optic transceiver testing is also an indispensable step to ensure overall network performance. As basic eye-mask test offers an effective and commonly used option for transmitter testing, testing the receiver can be more complex and requires more testing methods. A wide variety of fiber optic transceivers are available in FS.COM that are compatible with major brands on the market, such as Cisco, HP, IBM, Juniper, etc. Moreover, each fiber optic transceiver has been tested with the original-brand switch to ensure its high performance and superior quality. For more detailed information, please visit www.fs.com.