EPON vs GPON – A Practical Comparison

Ethernet passive optical network (EPON) and Gigabit passive optical network (GPON), just like the superheroes in the Hollywood movies, which lead the tide of broadband access and optical telecom application, becoming the new hot spot. As fiber access is poised for strong growth, subscribers may wonder how to choose between the two main PON standards: EPON vs GPON. The following passage will make a comparison between them.

EPON, based on Ethernet technology, is compliant with the IEEE 802.3ah (mid-2004) Ethernet in the First Mile standard that is now merged into the IEEE Standard 802.3-2005. It is a solution for the “first mile” optical access network. While GPON, or Gigabit PON, is expected to prevail as a leading optical access technology and to eliminate the bandwidth bottleneck in the last mile. Its requirements were set to force by the Full-Service Access Network (FASN) group, which was later adopted by ITU-T as the G.984.x standards. 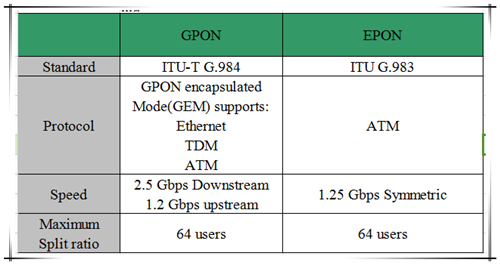 Besides the above characteristics, perhaps the most striking distinction between the two protocols is a marked difference in the architectural approach, especially in layering. The image below will help you to figure it out.

In EPON, Ethernet frames are carried in their native format on the PON, which greatly simplifies the layering model and the associated management. EPON employs a single layer that uses IP (Internet Protocol) to carry data, voice, and video.

GPON, on the other hand, supports two layers of encapsulation. First, TDM (Time Division Multiplexing) and Ethernet frames are wrapped into GEM (GPON Encapsulation Mode) frames, which have a GFP-like format (derived from Generic Frame Procedure ITU G.7401). Secondly, ATM (Asynchronous Transfer Mode) and GEM frames are both encapsulated into GTC (GPON Transmission Convergence) frames that are finally transported over the PON.

The main purpose of the GEM frame is to provide a frame-oriented service, as an alternative to ATM, in order to efficiently accommodate Ethernet and TDM frames. With GEM, all traffic is mapped across the GPON network using a variant of SONET/SDH GFP. GEM supports a native transport of voice, video, and data without an added ATM or IP encapsulation layer. That’s why GPON supports downstream rates as high as 2.5 Gbps and upstream rates from 155 Mbps to 2.5 Gbps. It is much faster than EPON. However, EPON clearly offers a much simpler and more straightforward solution than GPON. The support of ATM and the double encapsulation of GPON serve no real benefit over a pure Ethernet transport scheme.

The use of EPON allows carriers to eliminate complex and expensive ATM and Sonet elements and to simplify their networks, thereby lowering costs to subscribers. Currently, EPON equipment costs are approximately 10 percent of the costs of GPON equipment, and EPON equipment is rapidly becoming cost competitive with VDSL.

It is hard to say GPON is better than EPON, or vice verse. They each have their merits and demerits. When it comes to certain IP/Ethernet services, EPON is more suitable and cost-effective. While GPON has its own advantages in higher bandwidth, faster transmission rate and supporting triple-play services. Until now, EPON is still the mainstream of PON, especially in the Asian countries, but GPON is expanding quickly lately. Fiberstore supplies a large amount of PON equipment including GPON OLT, GPON ONT, GPON SFP, EPON OLT, EPON ONU, and PON splitters, etc. We are welcomed by all our customers to meet with the fast-growing demand for PON deployment.