What Is Fast Ethernet?

Fast Ethernet (FE) is a term of Ethernet in computing networking, which stands for carrying on the traffic at the speed of 100 Mbps. It came into the market in 1995 with the IEEE 802.3u standard and the original version was at the rate of 10 Mbps. Fast Ethernet makes use of 100BASE-T, 10BASE-T, 100BASE-TX and so on. 100BASE-T is the most common Fast Ethernet, whose cable’s segment length is limited to 100m. 100BASE-TX is the predominant form of Fast Ethernet, and each network segment can have a maximum cabling distance of 100m. Besides, Fast Ethernet has different features such as several PHY layers, and both full duplex and half duplex modes are supported by it.

What Is Gigabit Ethernet?

Another type of Ethernet offers 1000Mbps in computing networking, therefore, got the name gigabit. Gigabit Ethernet (GE) was released only a few years after Fast Ethernet coming about, but was not widely used until the internet demands increased around 2010. It uses a frame format of 803.2 and also runs on half duplex and full duplex modes. The maximum length of this system can be up to 70km, therefore most universities and companies use it. GE has different versions such as 1, 10, 40 and 100 gigabits. There are several typical varieties of Gigabit Ethernet, for example, 1000BASE-CX is an initial standard for Gigabit Ethernet connections with maximum distances of 25m, 1000BASE-KX is part of the IEEE 802.3ap standard for Ethernet operation over Electrical Backplanes and its specified distance is 1m, 1000BASE-SX is an optical fiber Gigabit Ethernet standard for operation over multi-mode fiber using a 770 to 860 nanometer, near infrared (NIR) light wavelength. 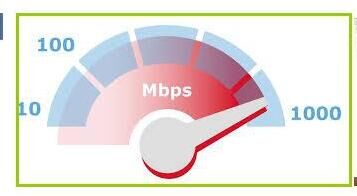 Fast Ethernet vs Gigabit Ethernet: How They Differ From Each Other?

This article has looked upon and explained the two types of Ethernet: Fast Ethernet vs Gigabit Ethernet. Fast Ethernet is slower than Gigabit Ethernet, and provides maximum data speed up to 100 Mbps. And the latter has improved its speed at maximum to 1 Gbps by improving cabling technology, MAC layer, flow control protocols and quality of service.