Things You Need to Know about Fiber MUX and DEMUX

With the development of the network, fiber MUX and DEMUX arouse many people’s interest in the telecommunication field. This passage will focus on the three questions. What are they? How do they work? When to choose which?

What Are Fiber MUX and DEMUX?

How Do They Work?

As you know, a multiplexer is often used with a complementary demultiplexer on the receiving end.

The picture shows that the circuit consists of a multiplexer (MUX) at the transmitting side and a demultiplexer (DEMUX) at the receiving side. A multiplexer is a switch that routes the input to one of its many outputs. the outputs are chosen depending on the binary number at its ‘select’ lines. The DEMUX works in a reverse manner to the MUX.

A multiplexer, also called data selector, is a combinational logic circuit. It selects one of the 2n inputs on the end route to the output. A multiplexer of 2n inputs has n select lines. They are used to select which input line to send to the output. Multiplexers are mainly used to increase the amount of data over the network within a certain amount of time and bandwidth. The following picture shows how does a MUX work. 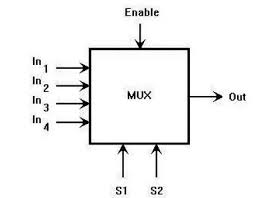 The demultiplexer is a combinational logic circuit. It performs the reverse operation of the multiplexer. DEMUX has only one input, n selectors and 2n outputs. Depending on the combination of the select lines, one of the outputs will be selected to take the state of the input. The demultiplexer converts serial data signals at the input to a parallel data at its output line. The process is shown in the picture.

When to Choose Which?

According to the working principles, MUX and DEMUX can be used in several situations. For example, communication system, computer memory, the telephone network, etc. MUX and DEMUX play a vital role in CWDM and DWDM system. In the WDM system, MUX combines multiple signals onto one single line. While demultiplexer separates the single data stream out to original signals. MUX and DEMUX in WDM are cost-saving. They are used by connecting a multiplexer and a demultiplexer together over a single channel.

After reading this passage, you may have got the basic knowledge of fiber MUX and DEMUX. Fiberstore, a leading WDM modules suppliers, offers a series of WDM modules. Such as 40 channel DWDM Mux, 4 channel mux-demux, CWDM 8 channel Mux Demux, 8 channel fiber Mux DWDM, CWDM passive Demux, and other network switches. You can know more details of our excellent WDM MUX/DEMUX at www.fs.com.