Coarse Wavelength Division Multiplexing (CWDM) has proven itself to be a preferred approach to elevate the bandwidth of optical access networks, offering quicker and simpler installation and lower overall cost. Passive CWDM, which requires no electrical power at all, is considered reliable and robust to deploy in the most demanding environment. It generally offers lower cost and more flexible installation and network expansion. This article demonstrates how to use passive CWDM technology to upgrade access PONs.

Passive CWDM is an implementation of CWDM that uses no electrical power. It separates the wavelengths using passive optical components. CWDM multiplexing components are compact enough to easily retrofit into existing fiber splice cassettes for installation into street cabinets or other forms of outside enclosure. Besides, it also processes the following merits:

For PON networks, be it in the ring or point-to-point structures, not all capacity is needed at a single optical node. Therefore, data transported over certain channels may be added/dropped from the fiber as required. And it may be implemented at any CWDM node at any location in the field. The picture below illustrates how to achieve this. This is generally cost effective and simple to perform. A passive CWDM upgrade simply eliminates the need for deployment of additional network equipment.

The advantages of the PON architecture above lies in the low CAPEX, low OPEX and no electrical power required. And that it can be quickly and inexpensively upgraded when additional bandwidth demands arise.

With the prevalence of FTTH networks, access networks between the central office (CO) and the subscribes must be upgraded to keep pace with the hunger bandwidth. The figure below shows a typical PON architecture, with an optical line terminal (OLT) located in the CO to transmit traffic to approximately 16 to 32 residential drop points, and PON splitters located at fiber distribution hubs between the OLTs and subscribers’ optical network terminals (ONTs), enabling one OLT port and laser transceiver to be shared across many drop points. 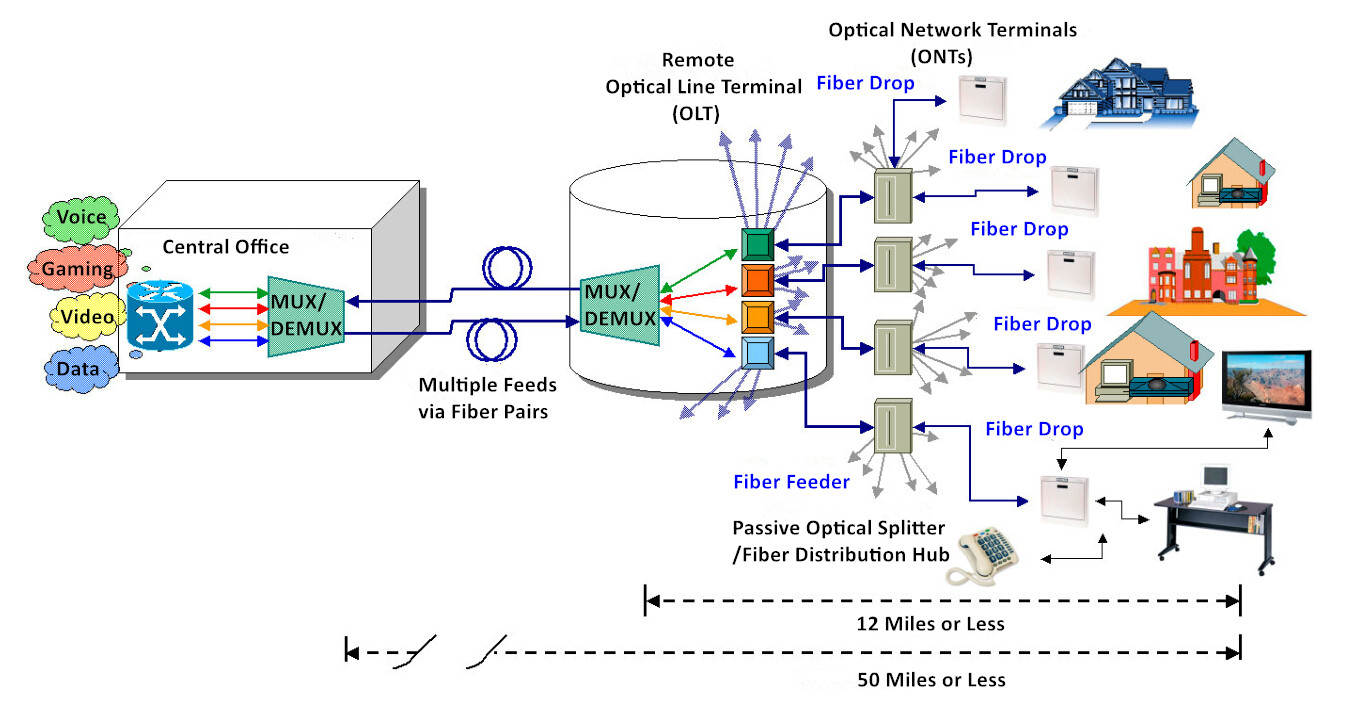 Case: In this case, existing subscribers intend to upgrade to higher value-added bandwidth services. The 622 Mb/s downstream capacity between the CO and the OLT, appropriately 20 Mb/s to each subscriber is proven insufficient, which must to increase.

Solution: The adequate bandwidth requires a downstream CO/OLT link bandwidth of 2.5 Gb/s. Multiplying the number of bidirectional channels traveling between the CO and OLT by four demands four CWDM wavelengths. The upgraded passive CWDM based network (shown below) relives the fiber exhaust and boosts the bandwidth of the CO/OLT link. This installation requires four channel-specific (color coded) transceivers plugging into the router/switch, the associated patch cables, the rack-mounted CWDM module and the snap in passive CWDM cassette located in the OLT.

Benefits: The passive CWDM upgrade can be accomplished within hours, while the cost concerning material, labor, equipment and training is far less than that of laying a new fiber cable. Which is both energy-saving and cost-efficient.

Passive CWDM is also beneficial to Ethernet PON (EPON). Let’s see how it works in EPON through the case below.

Case: The figure below shows a common EPON architecture, which serves up to 64 subscribers, all sharing a single 1.25Gbps bidirectional optical Ethernet feed line. The theoretical maximum sustainable data-rate for each is roughly 16 Mb/s. The 16Mb/S downstream capacity should be increased since higher bandwidth services become available.

Solution: A four channel passive CWDM extension effectively multiplies the downstream capacity without affecting the upstream traffic. A rack-mounted CWDM unit in the CO and a miniature hardened CWDM module deployed in the fiber distribution hub increases the revenue earning potential while minimizes OPEX and CAPEX.

Benefits: In this case, the four channel CWDM upgrade promotes the throughput of the downlink by a factor of four while demanding minimal modification of the existing infrastructure.