Multimode fibers are identified by the OM (“optical mode”) designation as outlined in the ISO/IEC 11801 standard:

Today, this evolution continues with the development of OM4 fiber as the industry prepares itself for speeds of 40 and 100 Gb/s.

OM3 and OM4 are both laser-optimized multimode fiber (LOMMF) and are developed to accommodate faster networks such as 10, 40, and 100 Gbps. Both are designed for use with 850-nm VCSELS (vertical-cavity surface-emitting lasers) and have aqua sheaths.

When the 10 Gigabit Ethernet (10GbE) standard released in 2002, the fiber optic links of 10GBASE-SR were standardized to at least 300 meters over Optical Multimode 3 (OM3) fiber. OM3 is the leading type of multimode fiber being deployed today in the data center, but it isn’t the best fiber any more. 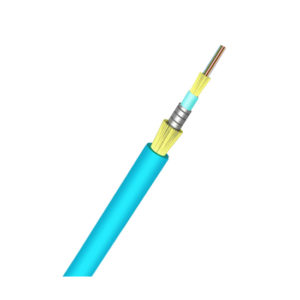 Optical Multimode 4 (OM4) fiber was standardized in 2009 by the Telecommunications Industry Association. OM4 is now the latest and greatest multimode fiber and the IEEE is setting the supported distance of 10GbE to at least 400 meters. Given the premium for single mode transceivers, OM4 fiber is the best option for the small percentage of users needing to run 10Gb/s over links between 300 and 550 meters (or the even smaller percent who anticipate running 40 or 100Gb/s between 100 and 150 meters).

When the 40GbE and 100GbE standard was released in 2010, OM4 was designed into the standard and achieved a distance of 150 meters on OM4 fiber while OM3 fiber went 100 meters. 90 percent of all data centers have their runs under 100 meters so it really just comes down to a costing issue right there. Laser-optimized multimode fiber is recognized as the medium of choice to support high-speed data networks. Actually, OM4 fiber defines the next generation multimode optical fiber for high speed fiber optic transmission.