Use Media Converters to Optimize Your Network

It is neither realistic nor possible for the network to stay static all the time, since the technology and capability of which advances dramatically throughout the world. In this case, there comes the constant demand for a more secure, more reliable and faster network. Media converters are such an ideal solution that designed for this dynamic networks, which enable network managers to take advantage of speed, bandwidth, and security enhancements by linking dissimilar cabling media, for example, cooper and fiber. In this article, we will concentrate on explaining how to apply media converter to your infrastructure.

What Are Media Converters?

Media converters do just what their name implies: They convert data signals on one cabling medium to signals that can be transported over another medium. Therefore, they provide the chance to extend the life of legacy networks with the latest technology, instead of having to tear everything out and start over when new technology becomes available, or even worse-being impeded by an old technology. 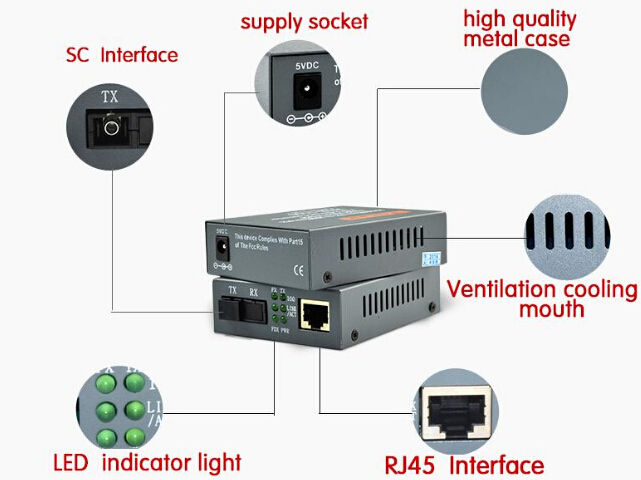 Media converter facilitates the connection of a multitude of devices by supporting connections to and from switches, hubs, routers, and even direct to servers. It hence brings more flexibility to the network.

How to Integrate Copper and Fiber Network with Media Converters?

When extending copper UTP Ethernet cabling at distances beyond 100 m (which is maximum for UTP) to fiber optic cabling, a fiber media converter is typically used. Media converters have two types of ports that for copper and fiber respectively. For fiber, there are ports designed for optical transceivers (SFP, XFP, etc.), and for fiber patch cables (SC, LC, etc.). While for copper, ports are all designed for RJ45 copper cables.

Speaking of employing fiber media converters to the existing network, firstly we’d better know the interfaces of them. The following picture illustrates the commonly used interfaces. Among which the ST, SC, LC, MT-RJ and RJ 45 interfaces of fiber media converters can be connected to target devices directly by patch cords. For SFP, SFP+ and XFP transceivers, things are different. This will be explained in the following.