Modem vs Router: What’s the Difference?

Modems, routers, hubs and network switches are widely used in building a network. When it comes to setting up a Wi-Fi network, it’s necessary to know what kind of network equipment you need. A modem and a router are the foundation of your Wi-Fi network. A modem can connect you to the Internet, while a router can connect your devices to Wi-Fi. This article will focus on what is a modem, what is a router, and modem vs router: what’s the difference.

Modem: a Bridge Connecting Your Local Network and the Internet

A router directs the Internet connection to all your computers, mobile phones and other connected devices you have. It connects to a modem through an Ethernet cable. And then the router passes that Internet connection to other devices in your house through an Ethernet cable or over a Wi-Fi network. It creates a private wireless network in a home, office, or place of business. For example, when you connect your cell phone to Wi-Fi, the cell phone is connected to a local router. A router lets all your devices communicate with one another over the local network. Besides, a router can protect your devices from being exposed directly to the Internet. To the Internet, all the traffic coming from your private network looks like it’s coming from a single device. 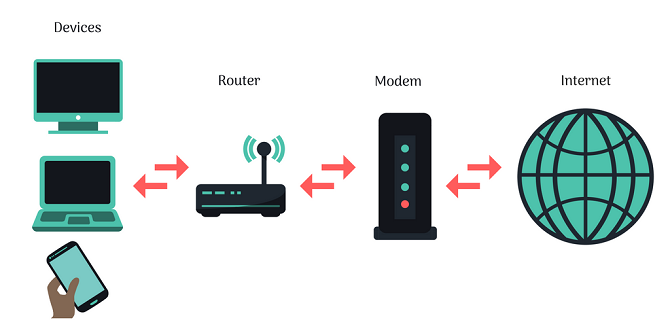 Modem vs Router: What’s the Difference?

When it comes to connecting your home devices to the Internet, we can’t miss modems and routers. A modem brings the information in, and a router distributes it to different devices like computers and phones. The following chart will show you the differences between modem vs router in detail.

A modem can connect you to the Internet, while a router can connect your devices to Wi-Fi. Modems and routers are both involved in connecting your home devices to the Internet. The differences between modem vs router include many aspects, such as layer, function, the number of ports, data transmission form, device type, etc. Except for modems and routers, switches such as Gigabit Ethernet switch and 10GbE switch also play an important role in building a network.

This entry was posted in Fiber Optic Switch and tagged modem vs router, network switch, wifi router. Bookmark the permalink.