How Much do You Know about CWDM & DWDM ?

Background of Wavelength Division Multiplexing (WDM)
Throughout the last 30 years, optical systems have increased their capacity regularly, allowing for bandwidth upgrades that outpaced the growth in bandwidth demands. Since the physical fiber optic cabling is expensive to implement for each and every service separately, the capacity expansion using a Wavelength Division Multiplexing (WDM) is a necessity. WDM is now a cost-effective, flexible and scalable technology for increasing capacity of a fiber network.

CWDM & DWDM Are Two Types of WDM
WDM architecture is a technology which multiplexes a number of optical carrier signals onto a single optical fiber by using different wavelengths of laser light. This technique enables bidirectional communications over one strand of fiber, as well as multiplication of capacity. At present there are two types of WDM architecture: Coarse Wavelength Division Multiplexing (CWDM) and Dense Wavelength Division Multiplexing (DWDM).

CWDM & DWDM Used in Optical Transceivers
Currently, much optical equipment is designed to support both CWDM and DWDM technology by using standards based pluggable optical modules such as SFP, XFP and SFP+. Among them, CWDM/DWDM SFP is a kind of optical transceiver which utilizes CWDM/DWDM technology. With these transceivers, if you have a number of these all transmitting on different wavelengths, you can use a passive multiplexer to combine each signal onto a single fiber pair, and then de-multiplex the signal at the far end. If you want to buy CWDM & DWDM SFPs, the Fiberstore supplies CWDM & DWDM SFPs that support data rates from 100 Mbps up to 4.25 Gbps and are available in all 100 GHz or 50GHz C-band wavelengths on the DWDM ITU grid. 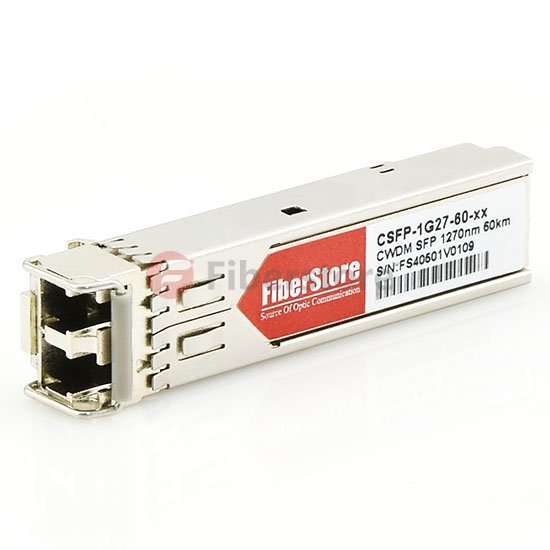